All Saints hosts a number of concerts and recitals throughout the year, including those organised by ourselves and those that are part of wider music festivals in London. We also support a number of local music groups with their rehearsals in church.

Use this page to keep up to date with upcoming concerts and recitals.

Festivals are arranged throughout the year, welcoming performers from London and further afield.

The All Saints' Festival is a series of concerts hosted in and around our patronal festival of All Saints' Day. This year, we are collaborating with the London International Festival of Early Music, as well as welcoming renound groups such as the Fieri Consort and the Iken Scholars.

See below for more details: 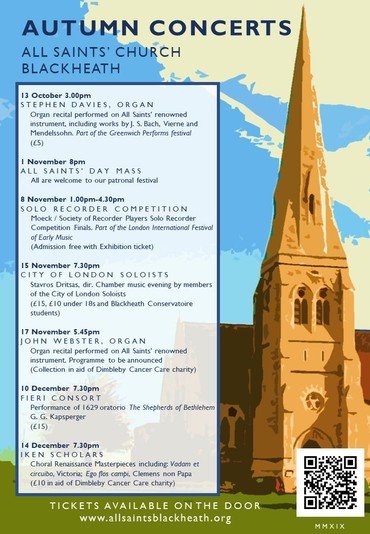 2020 marks the 250th anniversary of Beethoven’s birth and All Saints is proposing to mark the year with a festival early in the year of solo and ensemble performances focusing on Beethoven’s compositions.

Check back for performance details. 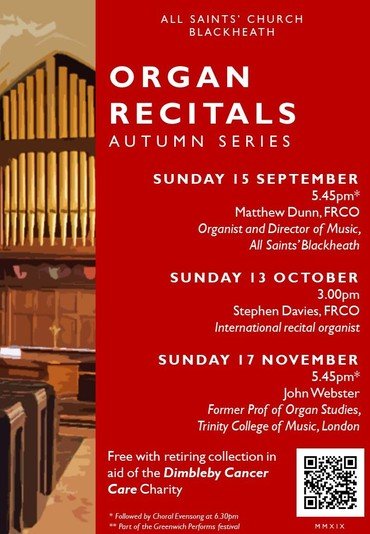 The organ at All Saints’ Blackheath was extensively overhauled in 2014-2015 by Harrison & Harrison.

Each month in term time we welcome a visiting organist to perform a recital before the monthly Choral Evensong. See below for upcoming performances.

London-based organist presents a varied programme ahead of our Choral Evensong at 6.30pm. The audience is warmly invited to stay for the service. Recital programme to be announced. There will be a retiring collection for the Dimbleby Cancer Care charity.

John's concert concludes our Autumn series for this year. Watch out for our Spring series, which will be starting in February 2020.

All Saints welcomes a range of groups to rehearse in the church at reasonable rates. If you would like to use All Saints for a rehearsal, please contact Matthew Dunn, the Organist and Director of Music.